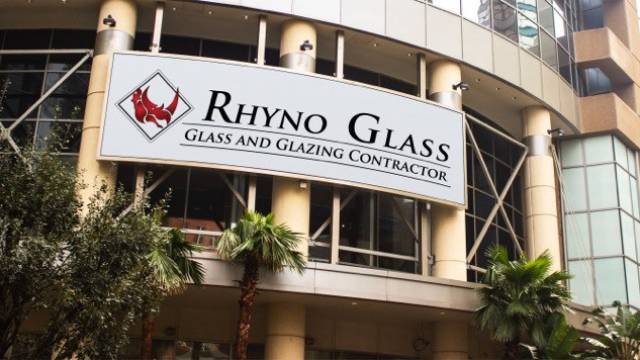 Rhyno Glass has moved to new premises, with President/CEO Wyatt Castellvi saying that importantly, so far the move has created two new administrative positions and gives the company the ability to expand four more office positions.

The establishment of the new facility brings Mr. Castellvi and several Rhyno Glass employees full circle, as it is in the very spot that once was their former employer, Harmon Glass. Mr. Castellvi began his career with Harmon, working for them for three years, learning the business aspect along the way. Harmon closed its doors in Tampa and re-focused, and now, “I’m proud to say we’re kind of a spawn of the former Harmon Glass company,” Mr. Castellvi said, adding that of the 25 employees currently with Rhyno Glass, “Sixty five to seventy five percent of our workforce is made up of  former Harmon Glass employees. “We couldn’t have experienced the kind of growth and success we’ve had without the amazing team we have in place,” he added. “Our loyal, dedicated team has more than 300 hundred years of knowledge and experience combined.”
Mr. Castellvi, who started his business “in a garage of 250 square feet,” said that setting up in this new location puts the company in position for continued growth. “Last year (2015) was just shy of five million,” he said, pointing to the company’s rapid growth as compared to the 63 thousand dollars in gross sales in 2010. Further evidence of the company’s growth is the new Currie Davis Drive facility being Rhyno’s third location in five years. Mr. Castellvi expressed his commitment to the Tampa area and to putting an emphasis on going green, noting in the case of the latter that, “We have invested in programming and software to be able to stay digital so as to stay environmentally responsible. Energy efficiency is a mandate on jobsites, aiming to reduce the carbon footprint.” Regarding Tampa as the company’s home he said, “I’ve lived in Venezuela, Texas, Virginia, DC, and Long Island, but Tampa is the one place that has held my attention the most. We want to help contribute to Tampa’s architecture and hopefully to the city’s skyline with projects that will have a legacy for 30-50 years.” Moreover, Mr. Castellvi added that, “We want to cultivate relationships. We want to be farmers, not hunters.”