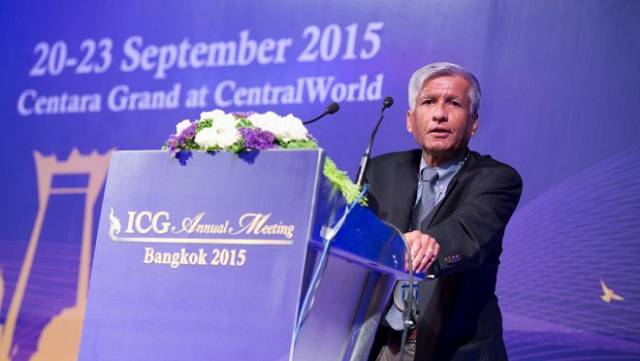 The 2015 Annual Conference of ICG was held this year from 20-23rd September at the Centura Grand and Bangkok Convention Centre at CentralWorld.

Almost 300 people participated, with over 113 presentations, including Profs Austin Angell, Reinhard Conradt, Neville Greaves and Arun Varshneya who gave plenary lectures. There were also 10 other eminent invited speakers.
Both the Gottardi Award and two Turner prizes were presented during the opening ceremony. The Gottardi Award is awarded annually to a young person whose achievements in the field of glass in research and development, teaching, writing, management or commerce have been outstanding. This year’s recipient was Prof Delia Brauer of Friedrich Schiller Universität, Jena. She presented her research on “Glass for biomedical uses: controlling dissolution, crystallization and crystallization”.
The Turner Award was given jointly to Drs Rupertus and Dr Köspel although unfortunately neither could be present. Both completed the maximum term of 9 years as Chairman of committees TC19 and TC14 respectively in 2014 and were heavily involved in ICG’s EFONGA project. Rupertus was in addition 5 years member of the CTC. Both are employed by Schott and have given of their energy and time in spite of carrying significant responsibilities at work. The support of Schott AG is acknowledged.
Bangkok marked the close of the 3 year presidency of Prof Peng Shou and the installation of his replacement, Dr Manoj Choudhary, Owens Corning, USA. Each spoke eloquently of their roles. Replacing Dr Choudhary as Vice-president was Prof Alicia Duran and this in turn required a new Treasurer. This position must be held in Spain, the home of the ICG bank accounts, and Dr Pascual was duly elected.
Prof Peng Shou began his speech with thanks. “At this special moment, I would like to thank all of you heart fully first. Thank you for giving me the opportunity to serve this great organization. Thank you for your trust and support for the past 3 years. The days working with you are an unforgettable, and cherished experience in my life”.
He congratulated the new leadership and went on to talk of ICG’s prestigious history. He added, “For the past 3 years, our academic research activities have been further promoted. Our membership team has been expanded significantly. Our influence and visibility have also been enhanced substantially. All this is attributed to the work and efforts of every ICG member. As I said in my president report, your voluntary, enthusiastic and valuable work has been and will always be the foundation for the success of ICG.”
He promised, “To still work with you and provide my full support for the work of ICG. I would continue to take advantage of my role and influence in the glass community of China and Asia-Pacific Region, promoting the development of ICG in China, Asia-Pacific Region and even in the world. I love glass. And I am proud to be able to make my contributions to the better development of world glass industry.” Finally he urged, “Let’s join hands to create a better future for this great organization!”
Dr Choudhary spoke under the banner headline: “GUIDED BY GREAT HISTORY; ICG, OUR AUGUST INSTITUTION MARCHES TO A BRIGHT FUTURE, WITH VIGOR AND AMBITION”. His desire was, “To give something back to our organization that prompted me to accept the responsibility when I was chosen the Vice President in 2012,” and thanked his predecessor Professor Shou Peng. “Under his vigorous leadership, we have witnessed a significant expansion of our activities in the Asia Pacific region. On a personal note he has been a dear friend and colleague under whom it has been my privilege to serve. Let us applaud him for his outstanding leadership.
“Next, I want to congratulate Professor Alicia Duran for being our next Vice President.  She has been a tireless and dedicated worker of the ICG for over three decades. She is a mentor and a dear friend and I look forward to having her as my partner in serving ICG. I also note that this is only the second time that our organization has a female leader and that is indeed worth celebrating.”
He then moved on to his vision and priorities for the organization, based on experience culled from working within ICG and many other professional organizations. He outlined key areas to focus on, “As we build on our great history and tradition and pursue a vigorous and bright future.”
• Be A Members Focussed Organization
• Retain and Attract younger colleagues
• Establish and Promote Strategic Roles for CTC and the TCs
• Build on our Financial Resources
• Enhance the Global Education/Training outreach and Industry-University-Research Institute cooperation of ICG (on its own and through professional alliances)
Dr Choudhary expanded on his aspirations under each heading, defining the actions required.
ICG held meetings of the Coordinating Technical Committee, the Steering Committee and Council in Bangkok. The Iran Glass Association was welcomed as the NPO for Iran and four new associated members were added. The Centro de Química Estrutural Instituto Superior Tecnico, Lisboa became the NPO representing Portugal. After a tight contest, Council nominated the Ceramic Society of Japan to organize the 2018 ICG Annual meeting in Yokohama, Japan, September 2018. Finally Peng Shou was accepted as the Chair of the Advisory Committee. The ICG President together with the Chair of the Advisory Committee will prepare a proposal defining the composition and role of the Advisory Committee.